Joy of The Joy: How to enjoy a wild sheep 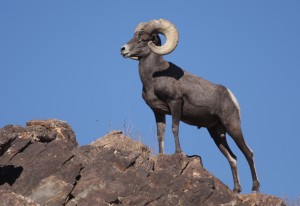 “Wild sheep and goats live in rugged terrain in the western part of the United States and Canada. They are plentiful, but one species of the bighorn sheep is currently considered endangered. There are four kinds of wild sheep that are called bighorn: Rocky Mountain, desert, Dall’s, and stone sheep. The desert bighorn is on the endangered list (not from overhunting, but from loss of habitat)….”

The things you learn from American cookbooks, eh? That’s right, cookbooks. You see, the author goes on:

Wild sheep and goat are both delicious; the meat is distinct and flavorful yet mild. Best cooked on the bone, the meat has a texture like lamb. Any goat – from the mountain goats we hunt to the domestic goats of the Caribbean – can be used in the recipe below…

But I won’t spoil the fun for you. Then again, it’s hard to resist revealing another national secret, just entre nous. On the same page you’ll find below the heading “About Bear”:

All bear is edible. Remove all fat and bone from bear meat and freeze or render. If rendered at once, it is prized for cooking; if held, it is good only for boot grease. 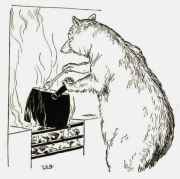 Goldilocks knew all about cooking bears.

Don’t tell anyone about this. At one time, perhaps still today, these recipes could be found in most American kitchens – though this may be news to the cook. They are published in The Joy of Cooking by Irma Rombauer, Marion Rombauer Becker, et al, America’s most enduring cookbook. Irma Rombauer’s “amateur but highly evolved enthusiasm,” wrote Christopher Kimball, founder and editor of Cook’s Illustrated, was “a breath of fresh air after the slightly earlier era of culinary dowagers Fannie Farmer, Mrs. Beeton, and Marion Harland.”

Since 1936 The Joy (shorthand) has been continuously in print. It has sold more than 18 million copies. Its energy and confidence make it as essential for the beginner as for the seasoned chef. It is, they say, the book your grandmother learnt to cook from (and still uses). Classic.

Yet this ordinary piece of American life turns out upon close inspection to be rather extraordinary. It isn’t just the way the recipes read like stories or the presupposition that what is cooked has first to be shot, skinned, plucked, and “rendered”. It isn’t just style: the cook’s love of food spiced with a dash of dogma and sugared with the teacher’s wonder. In this series of posts, we’ll discover how it is that just a handful of first editions had a dragon on the cover, the unlikely publishing history, the teaching and preaching, and the social upheaval that make America’s classic cookbook what it is.

The Joy of Cooking, 75th Anniversary Edition, by Irma Rombauer, et al. (Scribner, 2006)
In addition to hundreds of brand-new recipes, this JOY is filled with many recipes from all previous editions, retested and reinvented for today’s tastes. This edition restores the personality of the book, reinstating popular elements such as the grab-bag Brunch, Lunch, and Supper chapter and chapters on frozen desserts, cocktails, beer and wine, canning, salting, smoking, jellies and preserves, pickles and relishes, and freezing foods.