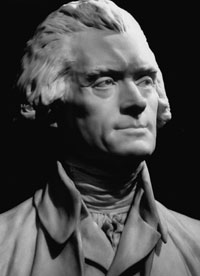 Thomas Jefferson, revolutionary and third American president, had three great loves. One was France. (“Every man has two countries: his own, and France.”) The second was his Virginia estate, Monticello. And the third was — well, read on.

Jefferson first planned Monticello in the 1760s, and his design was realised by the time he left for France in 1784. While in France, Jefferson trained his slave Hemings in French cookery and later his White House employed three French chefs. But France must have changed the forty-something Virginian’s other tastes for upon his return the house was redesigned and another thirteen years put into its construction. When the great American died nearly $110,000 in debt the contents of Monticello were sold, as well as the plantation itself. Since 1923, Monticello has been owned by the Thomas Jefferson Foundation, who charge $24 a day to see it ($8, children).

A page from Jefferson’s Garden Book listing which crops go where.

In the 1970s, as Americans were discovering that their homes had doors which led to the outside, it became fashionable to restore the nation’s historic gardens. While Jefferson remarked to Charles Willson Peale in 1812, “But tho’ an old man, I am but a young gardener,” this didn’t stop him plunging in up to his elbows with the carefree exuberance of someone trying to die $110,000 in the red. A thousand-foot long terrace was created for Jefferson’s vegetable beds, whose construction required the removal of huge amounts of soil and a retaining wall twelve feet high and ten deep (all of this done by enslaved hands). Eventually there were 24 beds, each of about 1600 square feet. Well, that’s a lot of vegetables but consider that Indian corn was a staple and artichokes do require a bit of space. (And think of all the manure.)

Jefferson’s Garden Book, which chronicles his agricultural successes (most things) and failures (wine, melons) from 1766 to 1826, gives us an idea of what sorts of crops he liked in his beds — and on his plate. In 1812, for instance, we see that he dedicated bed XIX to spinach and XXIV to kale, the sensible man. Salsify (probably Spanish), beets, garlic, and leeks bedded down at Square XIV, between the carrots and onions. He enjoyed red haricots (by the bedfull), “tomatas” and okra.

What surprised me was that Jefferson dedicated an entire bed (Square IX) to the nasturtium. Sixteen hundred square feet of silly old nasturtium. I couldn’t believe it but there they are, the only thing in the bed year after year, listed just after cucumbers and gherkins. What was going on there?

For starters, it was clear he was eating them. There were other beds for flowers to cut and put about the home, nasturtium not among them. Jefferson listed and planted it very specifically with the edible vegetables. Yum, yum in his tum, tum went those nasturtiums. (Note: See also, Great American Poems.)

The Fruit of a Nasturtium

Thomas Mawe and John Abercrombie, in The Universal Gardener and Botanist (London, 1778), wrote of the “economical” nasturtium: “When therefore it is intended to cultivate these plants as esculents [i.e., food], for the flowers and fruit, they may be sowed in the kitchen-garden in April or May…”. Flower and fruit? Indeed: “… they will thus supply you with abundance of flowers and fruit from June or July until October.” What would you do with the “fruit” of a nasturtium? Indeed, what is the fruit of a nasturtium?

Another book published in London in 1799 and called The Garden Flowers of the Year gives some clues. The entry for Nasturtium reads:

The various kinds of nasturtium, or Indian cress, make a great show in the garden. Linnæus named the flower from tropœum, a trophy, because of its helmet-like shape, and because, like too many of the trophies of man, it wore the dark red stain of blood…. The flowers of our common species are sometimes eaten as salad, and both these and the young succulent leaves and shoots have a pungent property, which renders them very wholesome. The seeds are very commonly pickled and used instead of capers.

Peregrine Pickles! What have we here? These Englishmen were cultivating a poor man’s caper in the guise of the dear nasturtium seed! Trophy, what! But did Jefferson, dexterous American gourmet, fancy himself a pickle man of the same cunning?

For this answer the obvious place to look was The Virginia Housewife (or, Methodical Cook), one of the most influential housekeeping and cook books of the nineteenth century. It was written by Mary Randolph, who was related (by marriage) to Jefferson. There I found my pickle. From page 167 of The Virginia Housewife:

Gather the berries when full grown but young, put them in a pot, pour boiling salt and water on, and let them stand three or four days; then drain off the water, and cover them with cold vinegar; add a few blades of mace, and whole grains of black pepper.

People still do this today, such is the longevity of a good pickle. Make your own? Check out the Celiac Farmer, Duncan’s pickle recipe, or a Canadian recipe for halibut with pickled nasturtium seeds. And do tell us if they’re good enough to sow a million of and preserve the sanity of Mr. Jefferson.

Books from our collection

For more details of Monticello’s extensive garden, the source is “A Rich Spot of Earth”: Thomas Jefferson’s Revolutionary Garden at Monticello, by Monticello head gardener Peter J. Hatch (Yale University Press, 2012). Foreword by chef Alice Waters, if you care. I’m uncertain about Hatch’s claims to the “revolutionary” nature of Jefferson’s plot — I don’t think he would have shown John Bartram anything new — but the book has as much depth and abundance to it as a double-dug raised bed.

Some wealthy American families hired Frenchmen in their kitchens — Étienne Lemaire, who cooked Jefferson’s dinners in the White House, worked previously for the Bingham family of Philadelphia — but ever since I first heard of James Hemings I’ve been curious about Monticello’s Paris-trained, enslaved French chef. For anyone else with the same affliction, I recommend Craughwell’s Thomas Jefferson’s Crème Brûlée (Philadelphia: Quirk Books, 2012), subtitled “How a Founding Father and his slave James Hemings introduced French cuisine to America”. (James was the older brother of Sally Hemings, a domestic servant with whom Jefferson is said to have fathered children.)