A blind leap into television history

Not long ago one of our county librarians, at Fakenham, sent us an email. “I’m curious as to the attached,” he said. “It appeared in an episode of the 1960s/70s TV programme called ‘The Name of the Game’. … It seems to depict images from World War One and I’m intrigued as to the significance it would have had for the American viewers.”

The image he sent looked like a piece of the set, just a framed picture on the wall,  pretty unclear. (Of course I had, and still have, no idea what significance this item had to the storyline, if any.) The picture showed a man’s head and shoulders in profile, set against a background of maybe six black and white photographs of war. Beneath the portrait was a quote — just readable — followed by what seemed logically to be the man’s name. Except the “name” looked like fuzzy caterpillars, totally illegible.

“I’d also like to know who the man is shown in the centre,” the librarian added. “If this is an easy one to answer then well and good but please don’t go to any trouble if it is going to be a complicated enquiry.”

I wanted to help him out, but golly … where does one begin?

I googled the quote: “War is one of God’s weapons for fighting the Devil in man. Therefore we welcome God’s chastising hand.” No dice. So I tried just the first sentence and got three results. In 2010, someone had left it as a comment on what I quickly perceived to be a not-so-friendly website, some kind of jihadist think tank. Definitely not what I wanted. To chase this enquiry there, I thought, would fling it well within the “complicated” zone. (Besides, the site was archived: no longer online.) I moved on.

The other two results were identical, messages posted to a group on Yahoo! — ya-hoo! — but alas, it was the very same librarian posting his enquiry there. From that I learned nothing new except the title of the episode. All right, the quote had turned up a blank, but I still had a couple other things to go on.

The Name of the Game starred Robert Stack, Gene Barry, and Tony Franciosa

Who was the man in profile? Was he a character in the show, an actor on “The Name of the Game”? Sifting through a lot of ABBA fansites, I found the show easily enough.

The series ran from 1968 to 1971. It was about three guys working for a magazine publisher, Howard Publications: a cruising reporter, the well-connected publisher, and the editor of a crime magazine. They were connected through a female character, the editorial assistant for each. A number of well-known names made guest appearances on the series, including Boris Karloff, Orson Welles, Burgess Meredith, Mickey Rooney, Janet Leigh, Frank Sinatra, Leslie Nielsen (from The Naked Gun), Robert Duvall — there are hundreds of them. Steven Spielberg even directed an episode, one of his first real directing gigs. The security cameras at the Oscars never picked up more fame as appeared on this show. I was surprised I’d never heard of it at all.

The episode in question aired on November 15th, 1968. The synopsis: “A bigoted millionaire is tired of America’s racial situation and sets out to use his millions to create a private army and take matters into his own hands.” Sounds very delightful indeed. One website notes:

“One of the season’s best episodes, in which Glenn Howard goes after a multi-millionaire bad guy who kills one of his field reporters. The domination of government by big business interests was not a commonplace subject for TV shows in the late 1960s.”

Well, I checked into a few of the guest stars but neither they nor any of the main actors (Robert Stack, Gene Barry, and Tony Franciosa) bore any resemblance to the man in the image. Still, I spent a diverting minute watching the show’s clever opening sequence. There is nothing  in the world really comparable to the opening sequences of early action shows. They’re just terrific.

The film that the television show was based on gave me no leads, either.

There was no way I was going to stumble randomly upon this man. The name below the quote was truly impossible to make out, but I could see there were three words and the first was certainly “William”. That’s not very helpful. Everybody and their mother is called William.

Before throwing in the towel, I made one last rendezvous with Google. It didn’t find the whole quote but perhaps it would find part of it. Sooner or later I turned up something promising: a journal published at University of Kansas. Google had found, “…announced that war was one of God’s weapons for fighting the devil in man. More practically, the editor felt that the Spanish-American War brought political unity…”

Well! Who was this “editor” that “announced…”? I had a strong suspicion that the word or words just before those in Google’s snippet would be the name of the man.

The link took me to an issue of the Midcontinent American Studies Journal, fall 1969, special focus: William Allen White (1868-1944), University of Kansas class of 1890. There was a photograph on the cover, by which I could see instantly that I had found the source of my quote.

I still had no idea why this William Allen White would have come into vogue around the late 1960s. Anyway, I wrote back to the Fakenham librarian:

The man is William Allen White (1868-1944), a journalist from Middle America and local hero. He was born in Emporia, Kansas, attended the college there and then the state university, returned to Emporia and bought the local newspaper, and died there. Must be something about Emporia that I don’t know.

White’s attitudes towards WW1, the Spanish-American War, and FDR are worth considering. His role in bringing the Americans into WW2 (founding the Committee to Defend America by Aiding the Allies) probably made him controversial. He supported American intervention, ironically, as a way to keep America out of Europe. This debate ended of course after Pearl Harbor.

It’s worth learning more about William Allen White. He twice won the Pulitzer Prize, met a number of U.S. Presidents, and wrote some very insightful things. In 1938, Life magazine called him the embodiment “of small town ideals and kindness and common sense.” There is a short biography of him here, and a slightly different one at Wikipedia. He is also to be found in our Dictionary of American Biography.

Oh, and for you curious small-town America folk, this is Emporia, Kansas: 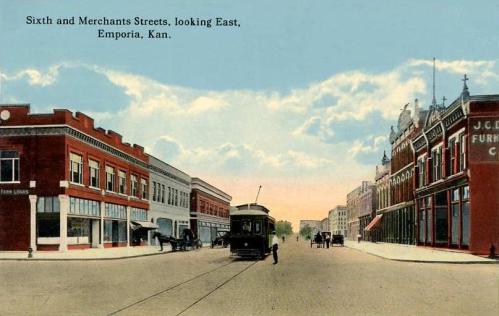 Tagged as television, the name of the game, william allen white