Pauline Byford was a typical Attleborough girl. Well, typical for the 1940s.

Pauline Byford in 1939 (photo posted with permission from Paul Harley)

Daughter of Charles and Edith Byford, Pauline served in the Women’s Auxiliary Air Force during the Second World War when the area was swarming with dashing American GIs. Like many other girls, Pauline enthusiastically made friends with the Yankees.

Her scrapbook of stories and keepsakes, recently archived by Picture Norfolk, details some of her adventures…

…Thursday March 8th, 1945. Caught 2.20pm train. Two Lieutenants and two Sergeants got in, who were going on a 3-day pass to Stockton. We drank tawny wine and ate all our sandwiches. They came to Nottingham. Stayed at the Flying Horse. We ate, then went to the Palais. They enjoyed it. Jack and Leon, Lieutenants and Shorty and Davis, Sergeants from [RAF Knettishall] Heath. Done 16 missions… Tuesday March 20th, 1945. Hitch(hiked) home. Stamford to Newmarket with 2 Yanks. They gave us this gum… 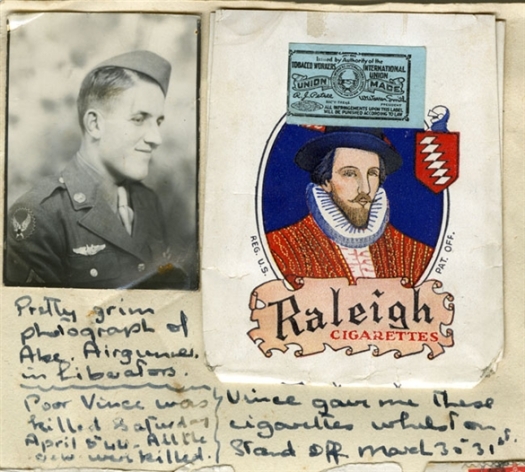 Above is a packet of Raleigh cigarettes, a gift from an airman named Vince who, according to Pauline’s caption, was killed Saturday 8 April 1944, along with the rest of his crew. There were, in fact, three different airmen named Vincent killed that day during Mission #28 over Brunswick, Germany, when “the Group suffered its heaviest loss in a single raid to date. Of the 32 planes that were dispatched, 7 failed to return. Heavy flak and severe enemy fighter attacks took a heavy toll, but the bombing results were excellent” (The Liberator Men of Old Buc, 2nd Air Division Memorial Library collection). Seven entire crews from 4 different squadrons all perished.

…In 1949 Pauline married Roland Harley, a wireless operator in the Royal Air Force, and the couple settled in Norwich. 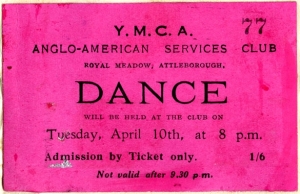 You can view Picture Norfolk’s recent acquisitions by searching their catalogue, where you can find several more images of Pauline and her friends…and many, many more illustrating both the high and the lows of life in wartime Norfolk.