Hanukkah, also known as the Festival of Lights and Feast of Dedication, is an eight-day Jewish holiday commemorating the rededication of the HolyTemple in Jerusalem. It is one of the most widely observed Jewish holidays and is celebrated by lighting a nine-branch candelabrum, commonly called a menorah.

The menorah has been a symbol of Judaism since ancient times. Fresh olive oil of the purest quality was burned daily to light its lamps.

During the second century B.C.E. Greek influence over the Jews in Israel threatened Jewish culture and ritual. Antiochus, the Greek ruler, forbade Jewish religious practice, so a small group of Jews, called the Maccabees, revolted. Victorious, the Maccabees set to restore the HolyTemple which had been desecrated. The menorah in the Temple needed to be re-lit because, according to tradition, it should burn continuously. Alas, the restorers of the HolyTemple found only one vial of oil, enough for one day of light. However, miraculously the oil burned on for eight days and nights.

Hanukkah begins on the 25th day of Kislev, according to the Hebrew calendar, which may occur any time from late November to late December in the Georgian calendar. This year, Hanukkah coincided with the American Thanksgiving celebration and so many Jewish Americans were celebrating what has been dubbed ‘Thanksgivikkah.’ According to some sources, the convergence of these two holidays will not happen again for another 78,000 years. 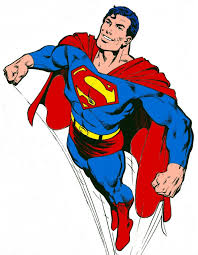 So what does Hanukkah have to do with Superman? Simple, Superman is Jewish. Superman was created in 1939 by Jerry Siegel and Joe Shuster, two Jewish Americans from Cleveland, Ohio. Looking at Superman more closely, we can see the ways in which Jewish history, culture and values shaped the iconic comic book superhero.

Superman issue  # 1 describes Superman’s escape from the doomed planet of Krypton, a narrative that closely resembles the story of Moses, the most important prophet of Judaism. Like the people of Krypton who faced annihilation, so too did the Jews of biblical Egypt face eradication and the killing of their male offspring. In an attempt to save her son, Jochebed places Moses in a basket down the river. In a similar fashion, Superman’s parents place him in the space pod down to Earth.

Moses found by Pharaoh’s daughter along the Nile.

Moses and Superman are discovered and raised by surrogate parents; for Moses, the Pharaohs and for Superman, the Kents. Both men are destined for greatness and charged with the responsibility of salvation.

Even Superman’s Kryptonian name, Kal-El, is thought to have wider biblical reference. The suffix ‘El,’ is one of the ancient names for God used throughout the Bible. It is also found in many of the names of the great prophets: Isra-el, Samu-el, Dani-el; and several angels: Micha-el, Gabri-el. The prefix of Superman’s name, Kal, is also the root of several Hebrew words loosely translated to mean ‘with lightness,’ ‘swiftness,’ ‘vessel,’ and ‘voice.’ Put together and you have something along the lines of ‘the swift God of lightness.’

Ethics of the Fathers, a compilation of ethical teachings which codifies the Jewish oral tradition, focuses on morality. One section of the teachings proclaims that the ‘world endures on three things: justice, truth and peace.’ In a similar vein, Superman represents ‘truth, justice and the American way.’ Another section of Ethics demands that one should strive to ‘be bold as a leopard, light as an eagle, swift as a deer, and strong as a lion.’ Sound familiar? Superman embodies the more recognizable attributes, ‘faster than a speeding bullet, more powerful than a locomotive, and able to leap tall buildings in a single bound.’

A literary hero formed amidst the backdrop of the Great Depression, regular anti-Semitism and paranoia over European fascism, the narrative within the Superman comic books and the Superman character himself is very much a testament of its time. Not only does it allude to the atrocities performed by Hitler during this time but it also speaks to the immigration and cultural dislocation felt by many Jews, and other immigrants, both before and after WWII.

Superman issue  #1 was published in the summer of 1939, just two years before the U.S. entered World War II. In Germany at this time, Hitler was preventing Jews from holding government jobs, going out at night and even owning radios—stripping many aspects of their citizenship. Just like Superman who was sent away from his native Krypton to avoid destruction, so too were many Jewish children sent away to seek safety—many of whom came to England initially and then the United States.

Created by two sons of Jewish immigrants, Superman is also thought to represent the immigrant experience. He is after all an ‘alien’. The U.S’s history of immigration is a large facet of the American identity. ‘A nation of immigrants,’ the U.S. has the ‘melting pot’ ideology and immigrant tale embedded into its very fabric. Gary Engle states that,

Clark Kent desperately craves the normalcy of American ordinariness; he wants to blend in. But Superman embraces his differences and in doing so enriches the lives of the public and community around him. The myth of Superman, some argue, asserts the value of immigrant culture in America, who like Superman, have added something unique and vibrant to the American cultural tradition.

Like many immigrants and this is especially true for second generation immigrants, Superman at times experiences cultural isolation. He is neither a native to the planet Earth nor in contact or connected to his home planet of Krypton. He is dislocated. In this regard, Superman is thought to closely mirror the experience of the marginalized. In fact, in the original newspaper strip, Superman was described as ‘the champion of the oppressed.’ 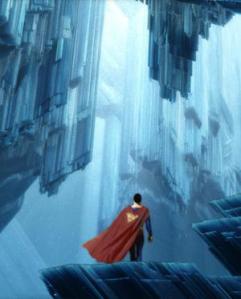 Superman at his Fortress of Solitude

A timeless character who has spoken to generations of Americans and many abroad, Superman means different things to different people. The Superman of today is very different from the original Superman and his image and narrative has changed alongside the social, moral and political zeitgeists of America. On par with his image as the ‘champion of the oppressed’ Superman spent his early days as a left-wing defender of the innocent and disenfranchised. Post-war Superman on the other hand, was thought to carry a more embellished version of American conservatism. This 1950s image of Superman, which dominated many television sets, presented Superman as the defender of democracy, ‘The American Way.’

Whatever Superman should mean to you, your childhood or your present day life, I hope we can join in to wish him and all those who identify as Jewish, a very Happy Hanukkah! The last day of Hanukkah is this Thursday, December 5th.

If you would like to do your own reading of Superman, follow through on some of the above information or learn more about Hanukkah, please check out the library catalogue  http://norlink.norfolk.gov.uk/02_Catalogue/02_001_Search.aspx . Here are a few from our collection.

Our Hero: Superman on Earth by Tom DeHaven

The Story of Hannukah by Susanna Davidson

Alternatively, you can refer to the articles cited here:

‘Simcha Weinstein, Up, Up, and Oy Vey: How Jewish History, Culture and Values Shaped the Comic Book Superhero’ Leviathan Press (2006).