In this series of posts, we will be featuring a different 2nd Air Division airfield and bomb group from World War II. In this post, the airfield in focus is Rackheath, home of the 467th Bomb Group. 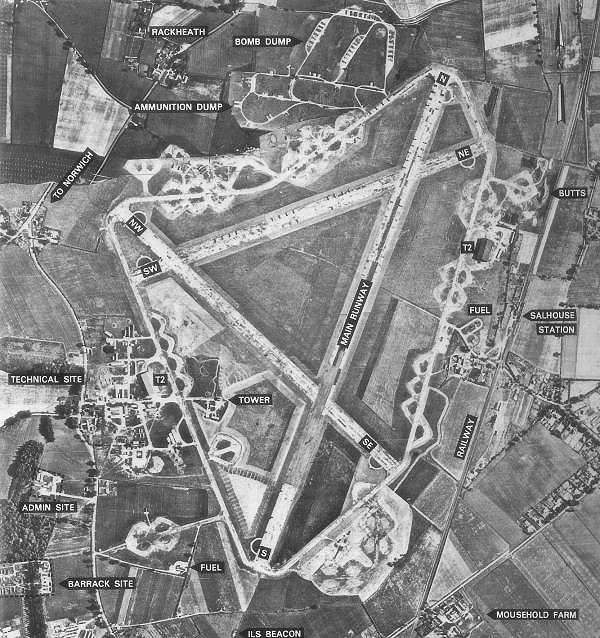 Rackheath Airfield is situated 5 miles NE of Norwich. It was the most easterly and therefore the nearest to Germany of all British wartime airfields

In February/March 1944, the 467th Bomb Group moved in with 58 B-24 Liberators. They were commanded by Colonel Albert J Shower, who was the only group commander to stay with the same group from beginning to the end of the war. He achieved the rank of Colonel at age thirty-one, one of the youngest Colonels in the Air Corps.

They flew their first mission against Bourges airfield in France, on April 10th 1944. They were a top-notch group, leading the 8th Air Force in bombing accuracy, and set a 2nd Air Division record by completing their first 100 missions in only 140 days. Witchcraft, a B-24 Liberator of the Group (and a model of which can be seen in the library entrance), held the record for the most combat missions for this type of bomber in the 8th Air Force (flying 130 missions).

Crew of a B-24 Liberator bomber

By the end of combat, the 467th Bomb Group had logged the following numbers:

After completing their final mission on April 25th 1945, the 467th BG returned to the USA in July 1945, and Rackheath returned to more peaceful uses with the help of the St Ives Sand & Gravel Company. The technical site was later adapted for light industry, which still flourishes as the Rackheath Industrial Estate, with many new buildings added in recent years. The control tower has been restored, and is used as office premises. There is a memorial plaque dedicated to the 467th Bomb Group near the village sign on Salhouse Road, next toto Holy Trinity Church.

All sites are now private property and permission must be obtained prior to visiting. Please contact Memorial Library staff.

A B-24 Liberator of the 467th Bomb Group flies over Berlin during a mission. Source: The American Air Museum

Be sure to also check out our post on Attlebridge Airfield (466th Bomb Group).