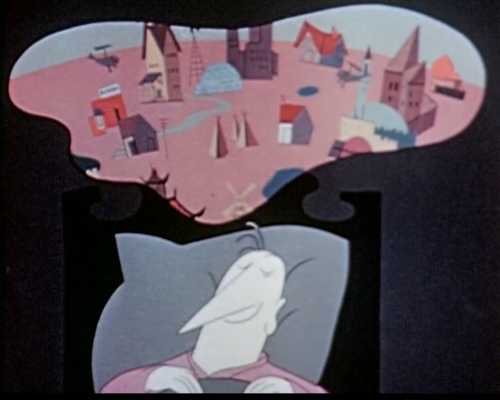 The strike of 1941 effectively ended Disney’s domination of the animation industry, gutting the company of major talent and encouraging Walt to redirect his attention to his theme parks. In this new vacuum, former Disney animators formed a new animation studio, designed in response to the exploitative and creatively stifling conditions of their old workplace. The resulting United Productions of America (UPA) sought to counter Disney structurally, politically, and artistically.

Instead of a strict hierarchy under Walt, the artists of UPA enjoyed greater freedom and autonomy, which would ultimately help bring about the premature end of the company. They could not survive such a competitive field. Nevertheless, before they closed shop, this short-lived company would prove to be one of the most influential studios in the history of American animation.

Whereas Disney promoted a sort of small-town conservatism, the artists of UPA were openly leftist and pro-union. Their political convictions are apparent from the content of their early shorts. However, as the company continued, their ideologies became less explicit. Their most famous productions – such as the Mr. Magoo and Gerald McBoing-Boing series – are not as overtly political as the studio’s earlier output. One of their later shorts, Man on the Land (1951), was commissioned by the American Petroleum Institute and contains a political message contrary to that of the animation studio.

Finally, while Disney privileged a sort of “hyperrealism” in their animation, the artists of UPA embraced more modern graphical sensibilities. They wanted to call attention to the inherently 2D nature of cel animation. Their flat and angular aesthetic proved to be the most influential part of the company, as it was quickly imitated by the likes of Warner Bros. and Hanna-Barbera. Even Disney would get in on the act with the Oscar-winning Toot, Whistle, Plunk and Boom (1953). Although, reportedly, the studio was only able to produce this type of animation because Walt was out of the country at the time.

The artists of UPA saw these three aspects of their studio as intrinsically linked. They were equally subversive in their structure, their politics, and their art. Even though imitators only tried to copy them in one of these aspects. In the below public domain shorts, you can see the development of their iconic style.

Hell-Bent for Election (1944) – In this pro-Roosevelt campaign video, UPA had not yet fully abandoned the rounded and soft designs of their former employers. However, note the beginnings of their graphical experimentations in the dream sequence.

Brotherhood of Man (1945) – Made for the United Auto Workers, this early UPA short was adapted from an antiracist pamphlet by Ruth Benedict and Gene Weltfish. It is the quintessential marriage of the studio’s form and content.

More Than Meets the Eye (1952) – Less overtly political than UPA’s other work, this commission film uses animation to visualize sound and try to convince viewers of the continued relevance of radio advertising.

Man on the Land (1951) – Commissioned by the American Petroleum Institute, this short demonstrates how easily the subversive aesthetics of UPA can be appropriated for illiberal ends. The artists themselves viewed the project as an exercise in form over content.

If you want to learn more about the evolving art styles of American animation, be sure to check out the following books on Disney from the 2AD Memorial Library: