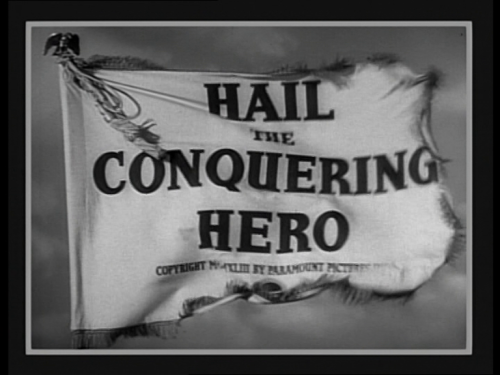 Not many people remember the name Preston Sturges. But, during the Golden Age of Hollywood, he held the distinction of being one of filmmakers permitted to write, direct, and produce his own movies. The other was Charlie Chaplin. Despite having such power and influence when he was alive, Sturges and his films are now virtually forgotten. Perhaps this is because of his preference for using the same set of non-celebrity actors in an age defined by movie stars. After all, his most well-remember – Sullivan’s Travels (1941) – is more known as a Veronica Lake vehicle than as a Preston Sturges film. Nevertheless, Sturges made a name for himself with some genuine comedic masterpieces in the 1930s and 1940s. For me, though, his best work was Hail the Conquering Hero (1944), a WWII satire of blind hero worship and small-town politics.

Woodrow Truesmith (Eddie Bracken) has been prevented from enlisting because of his chronic hay fever. Rather than disappoint his mother, he pretends to have been deployed oversea. One day, a group of marines hear of his plight and offer to help him perpetuate the ruse. Matters escalate from there. I hesitate to reveal more, as part of the joy of this film is seeing how things spiral out of control. But know that the result is a unique balance of cynicism and earnestness. It’s funny but not cruel, never invalidating the feelings of the characters. Woodrow genuinely loves his mother and doesn’t want to hurt her. The marines have experienced loss, and the film does not make light of it. At the same time, Hail the Conquering Hero avoids lionizes its subjects – including both the deceptive marines and the patriotic townspeople. It is a welcome respite from the typically rosy and uncritical portraits of these subjects from the era. It’s genuinely surprising to envision this film being released during WWII and not decades afterward.

The depiction of the marines is particularly noteworthy. At the beginning of the film, Woodrow has settled on spending the remainder of the war drinking in a tavern. It’s the marines who push him to return home wearing one of their uniforms and a few of their medals on a “medical discharge.” It was a wise decision having the marines be the ones who hoist this plot upon the hapless protagonist. Doing so helped mitigate the less savoury elements – the stolen valour and whatnot – of the farce. At the same time, even though these men are shown capable of all sorts of shenanigans, the film treats the marines with respect and solemnity. They may instigate chaos, but they are not clowns.

Through this mixture of farce and authenticity, the film delivers a final message to the viewer. Be sceptical of heroes, and do not idolise someone just because they tell you what you want to hear. Woodrow wasn’t a coward because he didn’t fight overseas but because he passively went along with what others – both the marines and later the townspeople – wanted. The ultimate act of courage – the one given the approval of the marines – is to tell the truth, even though it wasn’t something people want to hear.

If you want to learn more about the marines during World War II, be sure to check out the following books from the 2AD Memorial Library: