Like books? So do we. The Memorial Library captures something unique of the history and culture of the American people. While our collection covers all the bases, we’ve also got some unexpected gems – and we’re always refining our stock. Want to keep abreast of the newest arrivals, the timeless classics, the downright quirky? Read on.

I was thirteen when my grandmother snuck me my first romance novel.

The book my grandmother snuck me — sandwiched between the folds of the New York Times — was about as far from the classics as you could get. The plot revolved around a young woman sneaking into the British navy in the early 1800s to avoid marrying a man she didn’t love. Eventually, of course, she fell for the captain and he for her and the two of them ended up together, but the wrenches thrown in the way of their eventual happiness kept me entertained for days.

Discovering romance novels didn’t mean I gave up reading highbrow literature. I still love literary fiction. It’s just that now I intersperse those readings with more… fluffy books. What can I say? Sometimes it’s nice to know you can disappear into a world where a ridiculously wealthy heiress and an only-pretending-to-be-poor-actually-he’s-a- Duke can make a go of it, despite those seemingly overwhelming odds.

As we find ourselves increasingly indoors, barraged by the news, and probably in need of a healthy dose of escapism, I thought I would recommend some of my favorite pieces of lighthearted literature. In the spirit of maintaining the American-British connection (even while isolating) I’ve chosen works by authors from both countries. Everyone in these stories lives happily ever after, but it’s still fun to follow them on their (frequently winding) road to eventual bliss. 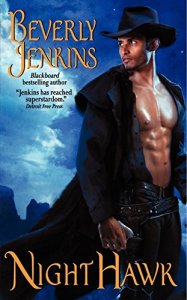 1. Night Hawk – Beverly Jenkins
An iconic author of historical romances, in 2017 Jenkins was awarded the Romance Writers of America Nora Roberts lifetime achievement award. Check out ‘Night Hawk’ — the story of a hardened bounty hunter who rescues a gorgeous spitfire in 1884 Wyoming — to see why.

2. The Right Swipe – Alisha Rai
In 2015, Rai became the first author to have a self-published book listed on The Washington Post’s best romance novel list, and followed it up by making Entertainment Weekly’s list of 10 best romance novels in 2017. ‘The Right Swipe’, the first in her latest series, is a contemporary romance about a CEO who hooks up with a former football player in what is definitely just a casual fling. Right?

3. Faro’s Daughter – Georgette Heyer
Georgette Heyer is the undisputed queen of the Regency Romance; in fact, she pretty much invented the genre. Heyer’s books are always impeccably well-researched, which makes them even more fun to read. Set in 1795, ‘Faro’s Daughter’ follows the plucky Deborah Grantham, a penniless orphan who has taken to working in her aunt’s gambling house. Sparks fly when she crosses paths with stubborn Max Ravenscar, the richest man in London. With such wide differences in their social status the two can never have a future… or can they?

4. Red, White & Royal Blue – Casey McQuiston
The surprise hit of 2019, ‘Red, White & Royal Blue’ follows the romance between first son Alex Claremont-Diaz and British Prince Henry. Initially rivals, Alex and Henry are forced to spend time together to ease diplomatic tensions between their two nations. But when what started as a fake truce turns into something real and deep, how will their families — not to mention their nations — react?

5. Deception – Selena Montgomery (Stacey Abrams)
Selena Montgomery is the pen name for Stacey Abrams, the 2018 democratic gubernatorial candidate in Georgia and the first African-American woman to give a response to the State of the Union address. In her spare time, Abrams writes romance novels like ‘Deception’, where protagonist Fin Borders tries to help an innocent woman accused of murder. In the process, Fin meets FBI Special Agent Caleb Matthews. Caleb is deep undercover and hiding a desperate history, but he can’t hide the passion he feels for Fin.

6. Darkness Calls – Caridad Pineiro
If you’ve had enough of vampires, then this book is not for you. If you take the same attitude towards vampires that most people do toward chocolate (what do you mean ‘too much?’) then The Calling series, by best-selling author Caridad Pineiro, is definitely up your alley. In this first book, FBI Agent Diana Reyes finds her world turned upside down when her father is killed in a drive-by shooting. Her endeavors to catch her father’s killer throw her in with Ryder Latimer, who is dark, dangerous, and has maybe possibly been alive since the Civil War.

7. Crazy Rich Asians – Kevin Kwan
Now a blockbuster movie, Kwan’s satire about a professor discovering her boyfriend’s family is part of Singapore’s one percent is a fun foray into completely over the top wealth. The plot is fast-paced, the characters engaging, and following people who can do literally anything they want right now is especially fun. There are significant differences between the book and the movie, so even if you’ve seen the plot on the big screen, it’s worth checking the book out.

Today I’d like to talk about one of my favorite new American authors, A. Lee Martinez. For any who like the insightful satire Terry Pratchett used when dealing with matters of high fantasy Martinez does in stories taking place in the modern. Able to poke fun at the subject matter while simultaneously writing a love letter to monsters, elves, rogue gods, and animal side kicks the likes of which entertained so many when they were young.

He wrote his first book, Gil’s All Fright Diner, while taking a creative writing class and with its success it seems he has never looked back. What I perhaps enjoy and admire most deeply about his writing is that each of his novels is stand-alone requiring him to create a new world with each story told. While most authors create one world and then expand it I find it truly remarkable to time and again create engrossing and novel takes on fantasy tropes and create literary worlds which suck the reader in.

Whether you want to read about hillbilly vampires and werewolves unwittingly saving the day, an employee for the cryptozoological animal control service, or a dating-service-like process for choosing a deity I highly recommend any and all of his works.

The last few weeks in the library have been a veritable book lover’s Christmas. A ton of new stock has come in, and picking one to highlight was difficult. I picked this one because the subject of the autobiography. The author is a speechwriter and ‘people behind the people’ stories fascinate me.

To head this review off, I thought the book was great. The story centers around a White House speech writer, David Litt, and his journey from newbie underling to member of Obama’s trusted team. It would be easy to dismiss this book as an Obama love letter, but this is not about the former president. It’s not even actually about the administration. It is rare to get a glimpse into life on The Hill from someone who does not stand directly in the public light.
Equally important and refreshing, is the writing style. The book reads without difficulty, like a buddy is filling you in on his day. I suppose this shouldn’t be a surprise, Litt is a speechwriter, after all. There is an unexpected amount of humor and relatability in the book. He talks about feeling invincible, about moments of awkward embarrassment, and the relatable moments of utter boredom. But, interspersed between these normal-person feelings are trips on Air Force One, nights out at Lincoln Center, and conversations with the President.
You don’t need to be a policy wonk to enjoy this book. Anyone interested in a little glimpse into the political life, enjoyed The West Wing, or reads every book that comes about The Hill, will enjoy this read.

“As lovely as Aphrodite—as wise as Athena—with the speed of Mercury and the strength of Hercules—she is known only as Wonder Woman, but who she is, or whence she came, nobody knows!”—All-Star Comics #8 (December 1941-January 1942)

New in the collection at the Memorial Library is a new Wonder Woman compilation. The hardback details the history of the character and follows each of her incarnations – from her first appearance in Action Comics, the Lynda Carter’s TV series, multiple animated series, and the recent feature film as well as beautiful photograph and several inserts, reproductions of Amazonian ephemera, as well as interviews with people key to the story of Diana Prince.

This book will appeal to all readers – young and old, those new to the Wonder Woman story and those who have followed her for years. It is easy to take several passes through this book in short order, page through for the photographs, again for the interviews and footnotes, and a third time to take in the great written history. At 175 pages you’ll fly through the book as if it takes no time at all.