The following article and poem were written by our guest Veteran Blogger, Freddie Becchetti, a Liberator bombardier who flew 35 bombing missions into Nazi Europe out of Tibenham, Norfolk, in summer 1944, earning the Air Medal and Distinguished Flying Cross.

He was a crew member with (and close buddy of) 1st Lt. Vincent Hamilton, one of the victims of the Birkenhead explosion. Hamilton completed his quota of 35 bombing missions as a navigator, but stayed in England at the request of the 8th Air Force and died tragically in a non-combat flight.

Fred has submitted the story and poem in honor of Vince and in appreciation of the local people who have helped to preserve his legacy. Our warmest thanks to Fred for sharing the following….

During a short but life-defining six months in 1944, Vince Hamilton was my closest friend, my comrade-in-arms, my best buddy. In England, we bunked in the same hut, we went pubbing together, we went biking together among English villages in search of fresh eggs, we joked with English girls we met along the way, we spent our leaves together dancing with pretty English girls in nearby Norwich and in London, we joined with Londoners dodging buzz-bombs, teasing with the girls in Picadilly Circus, dancing with the London girls in giant dance halls, having tea in our seats at the cinema and riding cramped up together in the tiny nose compartment of our B-24 Bomber on our missions. 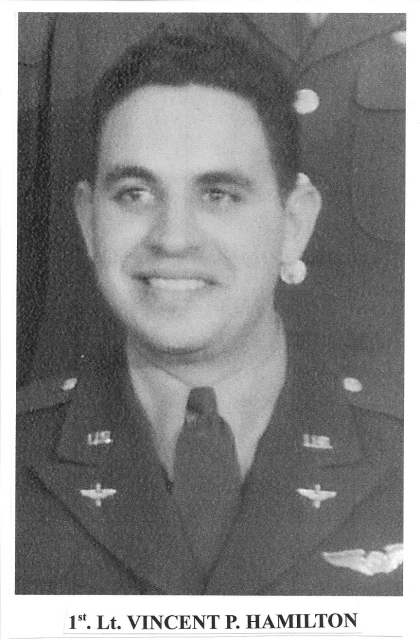 We were inseparable, so even though it has been almost seventy years, he has remained in the loving part of my memory since I first met him in March 1944 in training, high in the frigid skies of Wyoming.

In that same year, we completed 35 bombing missions into Nazi Europe, which made us eligible to go back to the United States. He would be able to serve as an instructor while waiting for a possible assignment to B-29s in the Far East for the final assault on the mainland of Japan. But the Eighth Air Force needed topflight navigators to carry on the war against Germany, and they asked Vince to remain in England.

I returned to the States as a bombardier instructor, but Vince agreed to stay in England. One month later I learned by rumor that he had been killed. I assumed that he had gone down in combat, but learned later that he had died at the age of 20 in the October 18, 1944, explosion of a malfunctioning B-24 Bomber in a stormy sky over Liverpool, England and that he was joined in death by 23 other American airmen passengers, most of them with their quota of 35 missions completed.

In spite of our closeness, we knew very little about each other’s family or background. He told me that he was from Brooklyn, New York, but he did not fit the Brooklyn stereotype that I had formed from movies. He didn’t speak of “dese, doze or dem guys,” and he was generally gentle in nature; although we did see him visibly angry when our pilot once failed to follow his navigational directions and almost flew us over the capital of Portugal on our way from Africa to England.

He asked me where I was from, and he burst out laughing when I told him I was from New Mexico. “New Mexico!” he roared. “What are you doing in the American army?” Whereupon, I explained to him that New Mexico was one of the forty-eight states in the Union. He kept laughing and asked, “New Mexico! What do they do there? Are there any Indians there?”

He didn’t know what to say when I told him that I had been brought up by my Tigua Indian grandmother.

After the war, I tried to bring the crew together with whatever addresses I had gathered while we were flying. The only address I had for Vince was “East 120th Street, New York City, “ which was not enough for me to contact his family. So I know nothing more about Vince Hamilton than what I was able to learn from him during those hectic six months of war with him.

If you had to do a war, Vince Hamilton was a good friend to do it with.

Doug Darroch of Wales was 16 years old when he witnessed the explosion that claimed Vince’s life. He would learn later that 24 young American airmen died in the crash…the entire crew. Fifty-one years later in 1995, that same Doug Darroch, his family and his community installed a rugged stone stele in Birkenhead as a monument to honor those 24 airmen and American airmen in general.

[Editor’s note: in anticipation of any confusion, Birkenhead is technically in England, but is indeed very close to the Welsh border, about 17 miles away from the northern town of Connah’s Quay.]

There were sweeping squalls,
and the thunder rumbled
across the fields of Wales;
Here and there, a sheet
of October rain from out
the earth-hugging clouds.

From her upstairs window,
a woman saw a silent aeroplane
drop from the gray of the sky
and hover in the misty air
as its wings fell free
and its heavy body twisted
down to earth in flames
and greasy, blackish clouds.

From a football field,
an army officer looked up
and followed with his eye
the terrible dive into the earth
and the rise of fiery smoke.

An artillery officer thought he heard
a bursting shell from overhead
and then the whining dive
of a machine in agony,
with jagged pieces fluttering
in the air like wingless birds.

From Oxton Road to Birkenhead,
a tender lad of sixteen years
took notice of the mournful scream
of an aircraft’s dive to death,
and that night, with curiosity,
he walked the railway tracks
to the circle of lights
where men and machines
searched the smoking ruin
for the living or the dead
and for the answer to why
the machine had fallen.

The lad watched and never forgot,
especially when he learned
that twenty-four young men like him
had died in that flaming dive.

Later he learned that the twenty-four
were from a land across the sea,
where mothers, fathers, family
with joyful flowers in their hair
waited for their return from war.
As the boy grew to be a man,
there lingered in his mind
the shriek of that fatal dive,
the glare of the searching arc lights
and the grim discoveries
among the jagged sheets of metal.

His books of history told of how
the airmen from America came
to join with airmen of Britain
to carry the battle to the foe
in lumbering, rattling flying crates
loaded with death and destruction.

He read of their death by thousands
high in the frigid skies by day,
while the British found death at night
to drive the cruel enemy back
and rid the world of his evil.

Still curious, the boy turned man
uncovered the names of the twenty-four
and found that many of them
had lived through battles
five miles above the earth
and were near to returning
to their homes across the sea.

He looked on them as friends
and their country as a friend,
so he gathered neighbors and kin
and planted a stone memorial
to the twenty-four American men
and to the friendship with the land
from across the ocean wide
that sent them to join with
British warriors in time of need.

All hail to Doug Darroch–Friend!

USAAF Liberator 42-50347 exploded without explanation over the fields between Little Storeton and Landican. To read more about the incident, visit this page for further details and eyewitness accounts.