Among the many honours bestowed upon WWII troops was membership to the Caterpillar Club and the Goldfish Club, awarded to airmen who successfully parachuted to evacuate a failing aircraft. The Goldfish Club’s members were those who had landed in water; the Caterpillar Club denoted those who fell to land “by a silken thread.” Whether with a silk escape map, an orifice compass, rubber dinghy, these men were either rescued or  found their own way to safety.

To honor the brave Caterpillars and Goldfish, we at the 2nd Air Division Memorial Library conduct a popular badge-making craft activity for youngsters. Today, a group of Norwich children visited us to learn about the American presence here during WWII. Mesmerised by the silk escape maps that we hold in our archive and impressed by the courage of the airmen, the children each made a Caterpillar or Goldfish badge to take away as a keepsake of their visit. 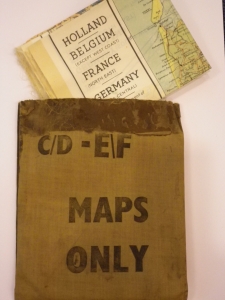 To read more about the history of the Clubs and their stories, visit the BBC’s People’s War website.